A star of Dragon's Den and a very successful entrepreneur, Peter Jones is a businessman who has been involved in some of Britain's biggest businesses. The owner of Jessops, Peter has used his time on Dragons' Den to invest in an array of different businesses, including the famous Reggae Reggae Sauce.

Growing up in Maidenhead, Peter took his formative steps in business by setting up a computer business before opening a cocktail bar in Windsor. They did not prove successful, however, and Peter was subsequently forced to sell his house and cars, and move back in with his parents.

He did not let this get him down, however, and in a show of perseverance, he set up a new venture, Phones International Group, in 1998. The early days saw Peter sleep on the office floor, but soon it became one of the most profitable companies in Europe, with a multimillion yearly turnover.

An inspirational businessman who did not let his initial failure discourage him, Peter soon invested in a number of profitable businesses. This included online wine retailer Wines4Business.com; Celsius, a specialist recruitment business; and in partnership with Theo Paphitis, a fellow panellist on Dragons' Den, a gift experience firm Red Letter Days. More recently, Jones became the owner and chief executive of Jessops, a UK-based camera and technology specialist reflecting his keen interest in the field.

In 2005, Peter became an investor on BBC 2 show Dragons’ Den, one of the most popular primetime TV shows of the last decade, and is the longest-serving 'Dragon' on the panel. Some of his investments in businesses that have appeared on Dragons’ Den include Wonderland Magazine, Square Mile International, The Generating Company, Concentrate Design, iTeddy and the cult jerk condiment, Reggae Reggae Sauce, a brand that is still successful to this day.

Peter has his own TV production company and has set up numerous other business-related TV shows, including ITV's Tycoon and The Inventor (now called American Inventor). Peter has also appeared on many popular prime-time TV shows including ITV 2's Celebrity Juice, Never Mind the Buzzcocks and Top Gear.

Peter is also helping to mould the next generation of British entrepreneurs by setting up his own business academy, The Peter Jones Enterprise Academy, which has numerous sites across the UK where Jones himself frequently comes to lecture or hold speaker events.

To book Peter Jones CBE as the speaker for your corporate event, function or conference, contact The Motivational Speakers Agency using the contact details below: 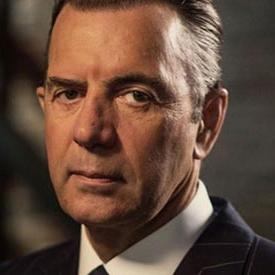