Known for his recipe for jerk barbecue sauce and his pitch on Dragon's Den, Levi is a reggae musician, television personality and businessman. Delivering unforgettable speeches at events, Levi speaks on topics such as entrepreneurship, business and other topics.

Levi Roots is a British-Jamaican reggae musician, TV personality, and businessman. Whilst most know him for his appearance on the business television show Dragons’ Den, there is really a lot more to Levi roots. Born in Jamaica but residing in the UK, Levi’s initial vocation was as a musician, performing alongside James Brown and Maxi Priest, being nominated for a MOBO Award, counting Bob Marley among his friends and singing for Nelson Mandela when he visited Brixton in 1992.

Levi was also a fine hand in the culinary arts, taking on his grandmother’s recipe for jerk barbecue sauce and selling four thousand bottles during the 2006 Notting Hill Festival. Even at this point, he had a savvy business knowledge and acumen that kept him ahead of the competition in the extremely busy carnival environment.

His fantastic sauce changed his life when he took his sauce to a trade show; he was spotted by someone from the BBC who gave him the chance to appear on the hit TV show Dragon’s Den. He was granted the investment he sought and his life was changed.

His leftfield style, which saw him enter the Den with a guitar and singing a ditty, went down a treat with the Dragons, as Peter Jones and Richard Farleigh offered him the £50,000 for a 40% stake in his business. Shortly after his appearance on the programme, Sainsbury’s announced that they would be stocking the sauce in 600 of their stores.

Since that day, Levi has built a business empire worth £40 million and extended his product range to frozen ready meals, soft drinks and cookery books. Roots’ charismatic personality also led to him appearing regularly on television cookery shows alongside his own series Caribbean Food Made Easy.

As one of the most successful contestants to come out of Dragons’ Den, Levi has continued to grow his business and has utilised his talents. He is an accomplished, experienced business speaker and entertainer.

See the feedback in which Levi has received as a speaker, below:

"Levi was a fantastic speaker! He managed to amuse, entertain and most importantly of all, inspire an audience of all ages. Thoroughly engaging and a true inspiration!" - University of Hertfordshire

“Engaging, inspiring and fun to listen to, his energy really comes across.” - Archant

"Levi was a great entertainer with an excellent story of success." - UKTI

To book Levi Roots as the speaker for your corporate event, function or conference, contact The Motivational Speakers Agency using the contact details below: 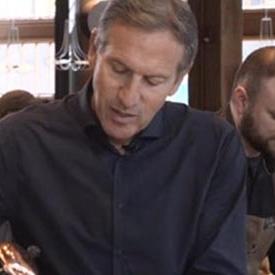