‘Big’ Joe Egan has experienced one of the most inspirational sporting careers and is universally known as Ireland’s most colourful boxing heavyweight personality. A fantastic boxing speaker, Joe’s charming persona make him one of the most desirable character’s on the after dinner speaker circuit.

First baptised in the ring fighting the then national junior champion Steve Collins, Joe Egan had embarked on his fantastic career that would eventually see him go the distance with Lennox Lewis. By the young age of 24, Joe had already recorded seven Irish titles, over eighty wins and had become a Golden Glove Champion. A graduate of Trinity College Dublin, Egan fought eleven times wearing a green vest in tribute to his home nation of Ireland and was known for his durable chin and hammer blow body punches. Perhaps Joe’s shining moment of his career came when he beat future WBA champion Bruce Seldon, stunning the ringside audience including Jake The Raging Bull La Motta.

Joe decided to try his luck in the USA after being encouraged by Floyd Patterson. Joining Mike Tyson’s training camp in the Catskill Mountains, Joe joined greats of the sport such as Cus D’Amato in preparation to become boxing superstars. Egan and Tyson became firm friends, with Mike describing Joe as the “toughest white man on the planet”. As a boxing speaker, Joe delivers anecdotal tales of his time in the limelight of the boxing world, and what his competitors are really like away from the cameras. 2008 saw Joe make the transition from boxing legend to production movie hard man.

Egan was approached by the successful filmmaker Guy Ritchie to feature in the 2009 Sherlock Holmes film, which became a Hollywood Blockbuster and a fitting new representation of Sir Arthur Conan Doyles infamous characters. Starring alongside the lead roles played by Robert Downey Jr and Jude Law, Egan played ‘Big Joe’ and later appeared in its sequel Sherlock Holmes: A Game of Shadows. Joe’s extensive boxing career and newfound talents as movie star make him a hard hitting boxing speaker, with the ability to engage audiences and tell inspirational stories of his times battling with some of the sport’s greats. Alternatively, Joe makes a wonderful event host, running the proceedings to any event whilst ensuring guests have a good time and are entertained with his wit, charm and approachable nature.

See what people had to say about Joe, when they appeared at the corporate events in which he appeared:

"Joe could not have been more accomodating, he was willing and able to entertain all, at no point was any request too much trouble. In short he was the life and soul of the event, a most captivating speaker and one hell of a nice guy to boot. If anyone was considering booking a celebrity for their event I could not speak higher of or recommend any more enthusiastically Joe Egan!" - Jonathan Palgrove, Spalding Round Table

Back to 'Boxing Speakers'
To book Joe Egan as the speaker for your corporate event, function or conference, contact The Motivational Speakers Agency using the contact details below:
Enquiry form 0207 0787 876 [email protected]
* 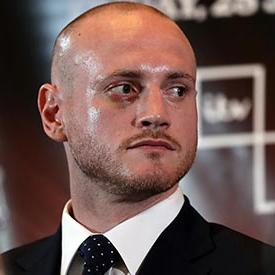