Independent Senator, Pádraig Ó Ceidigh, was appointed by the Taoiseach Enda Kenny (one of the 11 appointed Senators) in May of 2016, to the 25th Seanad Éireann. Pádraig is a current member at the Joint Committee on Transport, the Public Consultation Committee and Tourism and Sport. Sharing his highly respected opinions, Pádraig was the chair of the Joint Committee on the Future Funding of Domestic Water Services.

Most noted as the founder of Aer Arann Express and Aer Lingus Regional, Pádraig has always had an affinity for business. Over the course of his career, he has founded and developed countless businesses, from a variety of industries, including publishing, music, aircraft maintenance, outsourcing, homecare and internet marketing, both locally and internationally. For the residents of Ireland, Pádraig produced over 1,000 full-time job opportunities.

As a speaker, Pádraig can present in both Gaelic and English, as he is a fluent Gaelic speaker and Connemara native. Prior to his career in accountancy, teaching and as a successful solicitor, he received his third level education in NUIG. Furthermore, Pádraig also earned a degree from Harvard University.

Passionate about community support, Pádraig has led charity events and raised significant funding for charities including Our Lady’s Hospital for Sick Children, Temple Street Hospital in Dublin and various other charities. On top of being an acting patron for a number of charities, he has served on public bodies like RTE, Fáilte Ireland, Chairman of Ireland West Tourism, Bord Iascaigh Mhara, CROI, Chairman of National GAA Research Board and Chairman of NUIG Business School Advisory Board.

Additionally, Pádraig was named the NUIG Business Alumni of the Year in 2002, in celebration of his contribution to the Irish economy and prospective entrepreneurs, as well as Galway Person of the Year in 2004.

As a business management speaker, Pádraig applies his business knowledge to topics like education and equality, to give business owners an insight into responsible practices.

Listen to Pádraig Ó Ceidigh answering the question "Is change the new constant in higher education?: 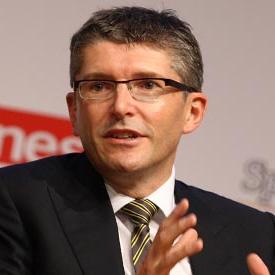