Wisden Cricketer of the Year for 1991, Desmond Haynes is a legendary West Indian Cricketer. Well-known for the prolific batting partnership he forged with Gordon Greenidge in the 1980s, Haynes and Greenidge made 6,482 runs, establishing themselves in the history books with the second highest batting total.

Scoring a century on his ODI debut, Haynes is one of the only players in ODI history to have scored a century on his debut and his last match. Since retirement in 1997, Haynes has turned his attentions to being an after dinner speaker, proving popular as a cricket speaker and sports speaker.

A feared West Indian opening batsman, Haynes plied his trade in the English League with Middlesex CC between 1989-1994 prior to a move to Western provence, Australia until his retirement in 1997. Initially, after his retirement, Haynes joined the board of selectors at the Barbados Cricket Association, later moving onto becoming the secretary of the West Indian Players’ Association, eventually progressing onto director of the West Indian Cricket Board.

His experiences throughout cricket both as a board member and an international player help promote his abilities as a speaker; this coupled with his articulate speaking capabilities help make him a popular addition to events and conferences as a cricket speaker.

A tactically aware cricketer who struck fear into bowlers worldwide, Haynes is well loved for his 'happy-chappy' personality, smiling persona, and his broad smile. Someone who will add a sense of familiarity and friendly reliability towards your event, the addition of Desmond Haynes as a keynote speaker or as an after dinner speaker will without a doubt prove a hit at your event.

Watch an interview with Desmond here: 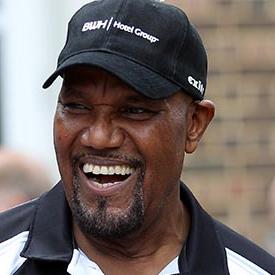