Carey Lohrenz is a former military pilot turned leadership keynote speaker. Best known as the first fully qualified female to fly a F-14 Tomcat for the US Military, Carey has an incredible tale of military service to tell. Having dealt with high pressure situations as a pilot, Carey is the perfect speaker to instil lessons of leadership, peak performance and keeping calm under pressure to corporate audiences across a variety of sectors.

Carey first began her training to become a military pilot at the Naval Airstation Pensacola, before attending flight school at both the Naval Air Station Corpus Christi and the Naval Airstation Kingsville. By 1993, Carey earnt her wings and became a pilot for the F-14 Fleet Replacement Squadron at the California Naval Air Station Miramar. Carey soon became a pioneer of military aviation, becoming the very first fully qualified female F-14 Tomcat pilot for the US Military. Since her training Carey has embarked on countless missions, flying across the globe as a combat-ready Navy pilot. Having experienced numerous hostile environments, Carey is an expert in dealing with dynamic and fast-paced situations where the slightest misjudgement can have catastrophic results.

As a pilot, Carey has honed skills of succeeding under pressure, problem-solving to overcome obstacles and perseverance to reduce errors. Such expertise allowed Carey to diversify her career to become a public speaker, specialising in keynotes of leadership, partnership and taking risks. Her mastery of skills from naval experience allows Carey to advise corporate clients on how they too can master such skills, helping individuals to thrive in the high pressure, time-crunched business world. Spending much of her career in a male-dominated environment, Carey is an inspirational female figure inspiring other women to follow in her footsteps and break gender stereotypes.

Inspiring fearless leadership, Carey has been requested to speak for a range of high-profile clients. Top Fortune 100 companies have enquired for her services, seeking her flawless leadership skills and to inspire optimal performance in their workforce. Some of her previous clients include PayPal, Dell, Deloitte, Cisco, Wells Fargo, Expedia and Toyota to name a few. Revered for her ability to connect with an audience, Carey is chosen time and time again to share her knowledge of managing diverse high-performance teams. Carey is also a published author, having written Fearless Leadership: High-Performance Lessons from the Flight Deck.

Described to have ‘high-energy’ in her motivational keynotes, Carey is the perfect speaker to engage audiences and help to better workforces. Covering topics such as lessons in leadership, striking a balance, remaining relevant and high risk, high reward Carey has transferable knowledge from her life in the military to help corporate audiences.

"Carey was AMAZING! So much of what she said resonated with our organization. Her story is inspiring, her message applies to everyone, and her ability to engage the audience with a story is great! Additionally, she is a true professional, easy to work with, and fully committed to making sure the client has a good experience… Thank you!"- Kirk, Saatchi & Saatchi

"We were honored and delighted to have Carey speak to a group of 350 of our leaders. Her straightforward and engaging style, combined with the quality of her content that had multiple linkages to a variety of issues, was very well received. She’s a total pro and I highly recommend her as a top-flight speaker!"- Bernard, St. David's Healthcare

"You were amazing and your presentation at our Hollywood Conference, was the best ever. Thanks for your dedication and professionalism as it was magnificent!"- Perry, GARDAWORLD

"What an inspiration! My biggest takeaways were about taking risks, standing your ground and tenacity! Your presentation was by far the most compelling and touching, thank you!"- Melanie, Barilla

"Wow! You were so inspiring and gave me great takeaways I can use with my team: Staying Focused on What Matters, Be Flexible, Adapt, Overcome, and Find my Third Way! You were captivating! So fascinating and yet relatable to MY world! Thank you"- Angie, District Manager Starbucks Coffee Company

Back to 'Military Speakers'

To book Carey Lohrenz as the speaker for your corporate event, function or conference, contact The Motivational Speakers Agency using the contact details below: 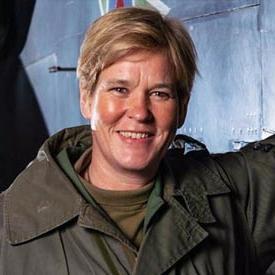