There simply is not enough room to list all the gold medals that swimmer and motivational speaker David Roberts CBE has won over the years, let alone his plethora of silvers and bronzes.

Commonly regarded as one of Great Britain's most successful Paralympians ever known, David Roberts is a Welsh swimmer and eleven-time Paralympic gold medalist. Attending Llwyncrwn Primary School before moving to Bryn Celynnog Comprehensive School for his teenage years, David’s swimming career started from a young age when he was encouraged to use swimming as a form of physical therapy for his cerebral palsy, which he was diagnosed with at the age of 11. David’s International Paralympic Committee (IPC) swimming category is S7 SB7 SM7.

Initially, he trained at the Swansea High-Performance Centre at the Wales National Pool in Swansea, but then moved to train with the Caerphilly County Swim Squad alongside his new coach, Peter Key. In 1993, David first represented his region, Wales, in a Glaswegian competition. Six years later, in 1999, he took part in the European Disabled swimming Championships in Braunschweig, Germany. In his first major competition, he won all four races. Attending his first Paralympic Games in Sydney, David went on to win an astounding 7 medals.

Following his impressive streak, at the 2001 European Disabled Swimming Championships in Stockholm, Sweden, David took home 5 gold medals, some of which being the S7 50 m, 100 m and 400 m freestyle events. A year later, at the Manchester 2002 Commonwealth Games, he was the only disabled swimmer from GB to win a medal against the able-bodied athletes. In 2002, in Mar Del Plata, Argentina, he won 3 gold medals, 1 silver and 1 bronze at the IPC World Swimming Championship.

David’s four gold and one silver medals from the 2004 Athens Summer Paralympics then earned him an MBE for his contribution to disabled sports. After being awarded 2 bronze, 4 gold and 1 silver medal at the following Commonwealth Games and 2006 IPC World Swimming Championships, David set new world records for the S7 50 m, 100 m, 200 m and 400 m freestyle events in 2008. At the following Beijing Paralympic Games, he took home four individual gold medals and a team relay gold medal. Due to this, he was then appointed Commander of the Order of the British Empire (CBE) in the 2009 New Year Honours.

As a speaker, David uses his experiences of peak performance and overcoming physical and mental challenges to inspire others to believe in their abilities. Charismatic, positive and captivating, he commands the room with his witty anecdotes and honest account of his sporting career.

Watch an interview with David, here: 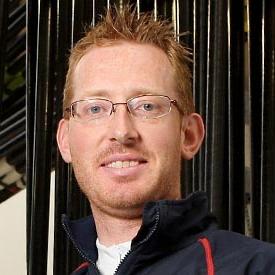