Geoff Meade is a well-known journalist who formerly acted as the European Editor of the Press Association for over 35 years. A respected member of the Brussels press corps, Geoff holds a plethora of knowledge in European issues and has followed the various changes and developments of the past three decades. As a speaker Geoff is sought for his extensive political knowledge, bringing understanding to various political, international and European issues.

Geoff Meade is best known for his role as European Editor of the Press Association, a role which he served for over 35 years. Building extensive knowledge of the European landscape, Geoff reported on various treaties, scandals and alliances across the continent. Spending three decades reporting from the heart of Brussels, Geoff is widely regarded as a prominent member of the Brussels press corps. Alongside these roles, Geoff is also well known for his contributions to various magazines. Previously he has contributed to the European magazines E!Sharp and The Bulletin and has also presented Leaders of Europe amongst cameos on European television. He has also formerly worked as a newsreader for Good Morning Britain.

After reporting on various international issues, Geoff has extensive inside knowledge and is able to break down the complex workings of Europe and make them understandable for all. Having experienced and reported on some of the greatest financial and political crises that have swept through Europe, Geoff is able to bring understanding to why such events happened and reveal what truly happened from an inside perspective. Geoff has compiled his experiences and thoughts of working through such events, authoring his book All In A Day’s Shirk.

Throughout his career, Geoff has been highly rewarded for his dedication to journalism, revered for his knowledge and passion for reporting. In 2016 he was appointed MBE, rewarded for the services he has provided to British people in Belgium. He has also been gifted with a plaque in the Commission’s Press Bar, making him the only journalist to have a plaque dedicated at the European Commission.

Now a sought after speaker, Geoff has previously delivered at a number of European events. Comfortable and confident as a conference moderator, Geoff is able to command an audience with ease leaving them engaged and captivated. With extensive knowledge of political and international issues, Geoff is able to set straight the misconceptions of such issues and help audiences to gain a better understanding of various European issues.

“He was very entertaining and gave us great insights”

Back to 'Politics Speakers'
To book Geoff Meade as the speaker for your corporate event, function or conference, contact The Motivational Speakers Agency using the contact details below:
Enquiry form 0207 0787 876 [email protected]
* 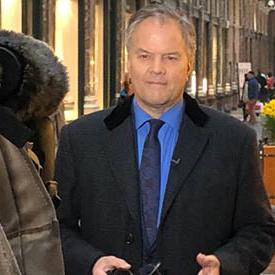