Andy has experienced huge sporting success in both League and Union disciplines of Rugby. A rare dual-code international rugby player, Andy represented his nation in resounding success in both forms of the sport. From an early age, Andy’s natural talent was obvious, allowing him to become the youngest player to make his senior league debut aged just 16.

His extensive career has led to Andy being one of the most compelling personalities and sports speakers around. Farrell also became the youngest winner of the Challenge Cup aged 17 years and 11 months, youngest full international at 18 and the youngest Player of the Year in 1994. All of these accomplishments show how remarkable Andy’s career and talent truly is.

Andy’s experiences and knowledge of peak performance make him one of the most sought-after and desirable rugby speakers for both after dinner and event engagements. Andy debuted for League side Wigan in 1991 where he showed his natural born leader capabilities, gaining the captaincy whilst making 370 appearances and scoring 2,693 points, including a record-breaking season in which he scored 429 points.

Andy enjoyed numerous successes with Wigan, winning four challenge cups and five championships. Andy’s physicality, great touch and cutting-edge vision began to attract the attention of multiple Rugby Union clubs. In 2005, Andy took on the challenge of a new discipline and signed with Saracens. Despite an injury-strewn start to his new career, Andy made his first try-scoring debut in 2006 and it wasn’t long before England coaches required Andy’s experience.

Andy became an elemental figure within the international team, making eight appearances at the 2007 6 Nations and World Cup. The experience of knowing how to achieve peak performance in multiple sports as well as leading a team to resounding success makes Andy a highly desirable rugby speaker on the after-dinner speaking circuit. Andy retired from playing in 2009 and took on a coaching role at Saracens, becoming a key part of the Premiership winning team of 2010/2011.

Following Andy’s success in a coaching environment, he got the call from the English RFU to fill the position of Back’s coach, rejuvenating the side from a poor World Cup performance. Farrell is one of the nation’s born leaders and Rugby superstars, as a Rugby Speaker and keynote speaker, Andy provides an insight into exactly what is needed to succeed in sport and as a leader of elite athletes on an international stage. 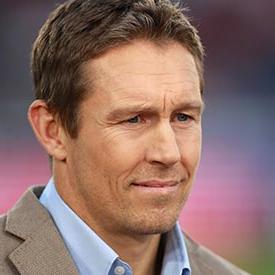