Legendary tennis player and coach Martina Navratilova is one of the greatest tennis players of all time. Ranked No.1 tennis player in the world, Martina has won the heart of fans and continues to be a prominent figure in the sporting world despite her retirement from the sport. Also an advocate for various issues such including animal, human and LGBT rights, Martina is highly sought as a public speaker. Covering the success story of her illustrious career, Martina also uses her prominence to raise awareness of topical issues.

Boasting an illustrious career that spanned the breadth of four decades, Martina Navratilova is widely regarded as one of the greatest tennis players of all-time ranked no.1 in the world for 332 weeks. Beginning to play the sport as a young child, Martina began winning competitions when she was just 15 years old, claiming the win at the 1972 Czechoslovakia National Tennis Championships. Becoming a professional tennis player in 1975, Martina has continually impressed fans and garnered a credible reputation in both tennis and the sporting industry.

Throughout her career, Martina has been fortunate to play in many prominent tournaments and finish victorious, ending her career with 18 single match wins, 31 double match wins, 10 mixed doubles wins and 18 Grand Slam wins. She has played in tournaments such as the Australian Open, French Open, Wimbledon and the US Open, described to have ‘superb athleticism’ in each tournament she played at. Retiring in 2006, Martina has since gone on to act as a coach in the sport, joining Agnieszka Radwańska’s coaching staff. She has also appeared in film and television, acting as a commentator for BBC and The Tennis Channel, working for Amazon Prime Video and starring in the Netflix show The Politician.

Along the course of her career, Martina has collected countless awards and recognition of her talent. She has claimed ranking as the No.1 tennis player in the world and has been awarded the 2003 BBC Sports Personality of the Year Lifetime Achievement Award. She has also been the recipient of the prestigious Philippe Chatrier Award in 2009. She has been bestowed as WTA Player of the Year in 1978, 1979, 1983, 1984, 1985 and 1986 and ITF World Champion in 1979, 1982, 1984, 1985 and 1986. Martina has also gained recognition in many lists from prominent publications and broadcasters. She was recognised in the BBC’s 100 Women 2013 list, 30 Legends of Women’s Tennis: Past, Present and Future by Time, 100 Greatest Tennis Players of All Time by The Tennis Channel and Second Greatest Female Tennis Player of All Time by The Tennis Channel.

Outside of playing tennis, Martina uses her prominence to push the importance of several topical issues. Openly gay, Martina is a passionate advocate for LGBT rights having previously spoken at the March on Washington for Lesbian, Gay and Bi Equal Rights and Liberation. Her activism for the rights of such individuals is close to her heart, with her passion being recognised with the National Equality Award from the largest LGBT activist group Human Rights Campaign. She also pushes the importance of animal rights and human rights, particularly interested in the fortunes of underprivileged children. Martina can be found travelling the globe tirelessly promoting such prominent and topical issues that plague today’s world.

Now a highly sought public speaker, Martina is widely regarded as an influential and motivational individual. From tales of her illustrious sporting career to overcoming adversity and LGBT rights, Martina is a diverse and engaging speaker who always entertains the crowds. Previous clients include the likes of HSBC, the Singapore Tourist Board, the Financial Times, Goldman Sachs and Barclays to name just a few. A strong believer in gender equality and LGBT rights, Martina Navratilova is the perfect speaker to inspire a diverse and inclusive workforce.

“Martina was truly an outstanding speaker who not only naturally captures the audience with her knowledge, passion, strong sense of confidence and charming attitude, but also stays on message, purposefully and eloquently, throughout a speech” – AARP

Back to 'Sports Speakers'
To book Martina Navratilova as the speaker for your corporate event, function or conference, contact The Motivational Speakers Agency using the contact details below:
Enquiry form 0207 0787 876 [email protected]
* 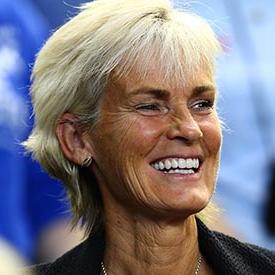