Chris Gledhill is an independent Fintech advisor, futurist and influencer. He has dedicated his career to the future of financial services, innovating the sector through fintech. Having previously worked for industry leading companies, Chris has developed erudite knowledge of finance, banking and business which he is able to deliver detailed keynotes on as a public speaker.

Chris first developed a keen interest in technology whilst studying at Loughborough University, obtaining degrees in Computer Science and Computing. After completing his studies Chris pursued web development, joining BG Group in 2000. From that point on Chris has held a number of notable positions in the world of technology, ultimately diversifying into fintech after developing a passion for finance too. After leaving BG Group, Chris held positions as a Software Engineer and Innovator at BAE Systems, Java Developer and SOA Architect at Barclays and a Data Migration Specialist for HM Revenue & Customs. These roles left Chris with experience in banking, finance and technology which have shaped him into the impeccable fintech advisor he is today.

Chris then went on to hold positions as Business Intelligence Analyst and Performance Tester & Integration Developer at the Department for Work and Pensions. His time at the Department for Work and Pensions saw him pioneer and develop data processing, visualisation and reporting frameworks. He then moved on to work in Consumerisation, BYOD and Enterprise Mobility at Shell. He has also held the role of Manager and Technology Consultant at Accenture, where he was responsible for enterprise mobility and integration architecture. In 2012 he was appointed as Enterprise Mobility Architect at Tata Consultancy Services, responsible for mobile payments and mobile banking apps.

Chris was appointed one of his most pivotal roles in 2012, accepting the role of Innovation Technologist at Lloyds Banking Group. This role ignited Chris’ passion for fintech, working as a technologist and futurist in the Digital Innovation and Payments team at the bank. His role with Lloyds saw Chris travel across the globe, working at destinations in California, Silicon Valley and London pioneering the intersection of technology and finance to businesses through engaging thought leadership. Chris then founded Secco Aura, acting as CEO to enrich his passion for fintech and revolutionise the world of banking.

Now Chris is currently working as an independent Fintech advisor, delivering speeches as a public speaker. His career has led him to have detailed knowledge of various aspects of technology such as blockchain, API, AI, virtual reality, big data, biometrics and cryptocurrencies. He has received continual recognition for his contributions, such as no.1 in Top 100 Global Business Influencers and no.1 in the #fintech100 list of Global Fintech Influencers. Chris is thought of as an authoritative industry leader in the world of fintech, and has quickly become a ‘must follow’ for all corporate clients who want to get to grips and ahead in the world of fintech.

Chris Gledhill is a fintech advisor and futurist. Here he is being interviewed at the 15th Retail Banking Forum, discussing the possibilities of technology such as blockchain and the secrets to great customer UX in banking.

"Chris is absolutely one of the smartest people I know and a truly original thinker. He manages to explain the complex simply and is always full of new ideas (and new takes on old ideas). He's a real innovator who is always looking for new things to invent and patent. I wish I was more of an ideas person like him. He's also a pleasure to work with"- Lisa, Research at Goldman Sachs

Ranked no.1 in the #Fintech100 list of Global Fintech Influencers

2008- Appointed as Java Developer and SOA Architect at Barclays

Back to 'Technology Speakers'
To book Chris Gledhill as the speaker for your corporate event, function or conference, contact The Motivational Speakers Agency using the contact details below:
Enquiry form 0207 0787 876 [email protected]
* 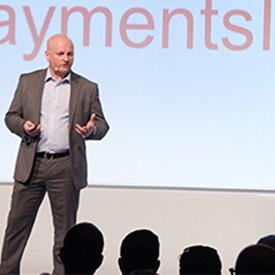