Andy is a Scottish professional tennis player best known for being British No. 1 since 2006 and for winning the 2013 Wimbledon Championships. He is known to be one of the most consistent players on the tour, reaching at least the quarter-finals of all Grand Slam tournaments he has participated in since 2011, with the exception of the 2015 US Open.

A year later Andy beat Djokovic in the final of Wimbledon to become the first British player to win a senior singles title at the All England Club since Virginia Wade in 1977, and the first British man to win the Men’s Singles Championship since Fred Perry, 77 years previously.

Andy is also the reigning Olympic champion, having defeated Roger Federer at the 2012 Olympic Games in straight sets to win the gold medal in the men’s singles final and becoming the first British singles champion in over 100 years. He also won a silver medal in the mixed doubles, playing with Laura Robson.

Andy is the only man in history to have won Olympic Gold and the US Open in the same calendar year, as well as only the third man to hold the Gold Medal and two majors on different surfaces (after Andre Agassi and Rafael Nadal). Subsequent to his success at the Olympics and Wimbledon, he was voted the 2013 BBC Sports Personality of the Year. Now one of the most popular sportsmen in the country, Andy is an instantly recognisable star who would propel the stature of any event forward as a motivational speaker.

A furiously proud Scotsman, he is intensely focused on his goals he sets himself, showing unrivalled motivation levels, and is living proof that hard work can get you to the top of your discipline no matter how many setbacks are encountered and how many people write you off.

Watch Andy Murray's press conference ahead of his first round match at Wimbledon 2019: 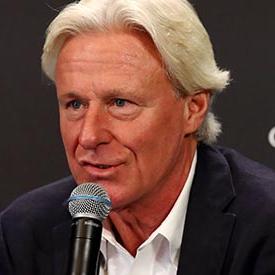