Mike Mullane has complete some of the most challenging tasks and missions in the world. From combat missions to space shuttles, Mike understands the importance of teamwork, leadership and safety.

Retired USAF officer, engineer and aircraft pilot, Colonel Mike Mullane is best known for being a former NASA astronaut that now inspires, motivates and shares incredible insight to individuals at speaker events all around the globe.

After graduating in 1967, Mullane was commissioned into the United States Air Force and became a Weapons Systems Operator on board the RF-4C Phantom aircraft. During this time, Mullane completed 134 combat missions in Vietnam before being selected as a Mission Specialist in the first group of Space Shuttle Astronauts in 1978. After a gruelling training period, and completing three spectacular space missions, Mullane retired from NASA and the Air Force.

Mullane is a recipient of many awards throughout his career, that include the Air Force Distinguished Flying Cross, Legion of Merit, the NASA Space Flight Medal, and has also been inducted into the International Space Hall of Fame. Not only that, but he is the author of award-winning children’s book, Liftoff! An Astronaut’s Dream.

Furthermore, since his retirement from NASA, Mullane has pursued his passion for mountain climbing, and has now reached an average of nearly 500 miles per year backpacking up some of the biggest mountains in the world. Some of his most notable climbs include forty of Colorado’s 14,000-foot peaks, the glaciered peak of Mt. Rainier, and Africa’s highest peak, Mt. Kilimanjaro.

A professional speaker that has received wide acclaim for his presentations, Mullane has educated, entertained and inspired thousands of individuals from a variety of industries. During his fascinating presentations, Mullane often discusses topics that revolve around teamwork and leadership, drive and determination, safety and risk, spaceflight and his time at NASA.

“Thanks for the wonderful presentation which was filled with action, humor and carried the messages of safety, teamwork, and leadership. You’re messages were absolutely on target. We have had positive feedback from our logisticians, engineers, technicians and management. Your presentation was expertly delivered and everyone who left was charged, energized and felt empowered.” - Systems Engineer, Office of Engineering & Technology

“Honestly it was an absolutely fabulous presentation, I can hardly put into words.” - Director, Sales Audit

“I cannot thank you enough for such a wonderful job you did for us yesterday.  We have gotten rave reviews on your presentation and everyone really seemed to have enjoyed you!  Thanks so much! I have provided my address for you to send the books.  I look forward to reading it!” - BB&T

Back to 'Astronaut & Space Exploration Speakers'
To book Mike Mullane as the speaker for your corporate event, function or conference, contact The Motivational Speakers Agency using the contact details below:
Enquiry form 0207 0787 876 [email protected]
* 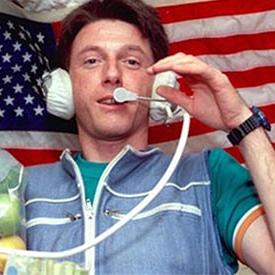