Urban designer Arthur Kay is pioneering the creation of sustainable cities and advocating the importance of such places. An entrepreneur at heart, Arthur has utilised his expertise to found several innovative companies that spearhead green energy and urban development. As a speaker Arthur has previously delivered at prestigious events, covering subjects of sustainability, design and innovation to inspire others to follow in his footsteps.

In 2014 after devoting his time to a number of established companies, Arthur harnessed his entrepreneurial spirit and founded his own company. Having always possessed a keen interest in sustainability and the environment, Arthur founded Bio-Bean Ltd. Now an award-winning green energy company, Arthur channelled his genius into Bio-Bean who work to recycle coffee grounds into biofuel and biochemicals. Low-cost yet high-quality, these eco-friendly products have seen Arthur pioneer the world of fuels for businesses and ensure a reduction of costs and emissions.

Three years after the launch of his first company, Arthur founded another. In 2017 he founded Fast Forward 2030, a bid to enrich his passion for sustainability. As the founder and chairman of Fast Forward 2030, Arthur works to promote the UN Sustainable Development Goals to businesses across the country. He then founded Skyroom, which soon became another award-winning company. Established as a means of providing urban development, Arthur has provided low-cost and eco-friendly homes to the urban workers of London.

Alongside the companies he founded, Arthur has also committed his time to a range of other roles. He is an Entrepreneur in Residence and Fellow of Unreasonable, a consultant and advisor of WIRED and a UN Sustainable Development Goals Pioneer. Arthur also dedicates time to teaching others his wisdom, acting as a visiting lecturer of Imperial College London and an Entrepreneur in Residence and visiting lecturer at University College London.

Throughout his career, Arthur has been highly rewarded for the work he has completed. He has been recognised in Forbes Magazine in their 30 Under 30 All Stars Alumni and he was also named by The Guardian as Sustainable Business Leader of the Year. The Evening Standard has also recognised Arthur, making their 25 Under 25 list. Such highly-rewarded work has been featured it high-profile publications, such as the likes of National Geographic, The Huffington Post and The Telegraph.

With such expertise and knowledge, Arthur is often sought as a public speaker. He has previously spoken at TED events, delivering speeches such as Designing Tomorrow, Today. An authoritative speaker on sustainability, innovation, green energy and design Arthur has engaged audiences across the country. Passionate and knowledgeable, Arthur is the perfect keynote to inspire future generations to look after the world they live in, raising awareness of sustainable cities and ensuring that they are created.

Arthur Kay is an award-winning urban designer and entrepreneur. Here he is delivering a TED talk titled Designing Tomorrow, Today

"I was captivated. I love hearing about engineering efficiency. [Arthur] articulated a worthy goal that others overlook"- Steve Wozniak

"I am buzzing. A brilliant example of how to inspire and support innovation in this important area"- The Mayor of London

"Arthur gave a powerful keynote and chaired our session on climate change. He kept our audience on the edge of their seats"- The Guardian

2017- Consultant and Adivsor at WIRED

Back to 'Entrepreneurship Speakers'
To book Arthur Kay as the speaker for your corporate event, function or conference, contact The Motivational Speakers Agency using the contact details below:
Enquiry form 0207 0787 876 [email protected]
* 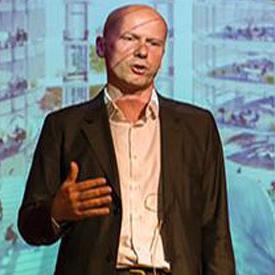