Ann Daniels is a pioneering polar explorer who became the joint first woman in history to reach both the North and South Poles. As part of some of the most ambitious expeditions, Ann has continually showcased her desire to go further in pursuit of research.

Voted by the Daily Telegraph as one of the all-time Top 20 Great British Adventurers, Ann is a hugely successful and proactive explorer, whose passion has led her to record-holding feats. In 2009 she was awarded the Hero of the Environment award alongside her fellow expedition explorers from the Catlin Arctic Survey.

As a motivational keynote speaker, Ann is recognised as one of the leading authorities in her field. She is regularly sought to speak on motivation, leadership and challenges in a corporate environment, in addition to imparting information on the North and South Pole that has been highly-regarded by audiences, as well as by broadcasters around the world in recent times.

Brought up on a council estate, Ann speaks about battling hard to get where she wanted to be. Her husband would point to an ad in the newspaper prompting ordinary people to get in touch for the McVitie's Penguin Polar Team Relay. It proved the catalyst to the life of adventure that Ann would go on to lead. After fighting off stiff competition in a selection weekend, Ann embarked on the all women's ski team to the South Pole in the year 2000.

Throughout the expedition, the team battled freezing cold conditions up to -58 degrees, in scathing storms. At one point, the team were confined in their tent for three days, suffering from frostbite as they waited for the storm to blow over. On death's door, Ann altered her state of mind, meditating to block out the scarily real scenario they were in. She would survive, to reach both the North and South Poles alongside Caroline Hamilton to become the first woman in history to do so. They achieved a Guiness World Record for their monumental efforts.

In 2009, Ann was honoured by globally-renowned explorer Pen Hadow to be head of ice operations for the Catlin Arctic Survey, an environmental study of the vanishing Arctic ice. She would go on to lead the second and third Catlin Arctic Surveys, to prove herself as one of the foremost Arctic explorers. A wonderful speaker whose knowledge, experience and personality allows her to craft compelling speeches suitable for all manner of audiences - Ann Daniels is the ideal choice for inspiring a team.

“What a speaker. We were spellbound with your fantastic and interesting presentation. You left us all feeling we could achieve that little bit more.” - IBM

“Thank you for being such a brilliant speaker. I have had tremendous feedback and needless to say it will be an evening that will remain in people’s minds.” - Vodaphone

“Outstanding presentation. Your unbelievable achievements touched the whole audience and your delivery made us believe we can achieve anything we set our minds to.” - Marks & Spencer

“The best speaker we’ve had. She was motivational and relevant to the current challenges we face in the workplace today. She inspired us all to strive to achieve so much more, individually and together as a team.” - Disney

“Ann Daniels presentation was superb with lots of personal experience and an excellent collection of photographs. She was an inspiration and the hit of the conference.” - NCC Group

Back to 'Explorer & Adventure Speakers'
To book Ann Daniels as the speaker for your corporate event, function or conference, contact The Motivational Speakers Agency using the contact details below:
Enquiry form 0207 0787 876 [email protected]
* 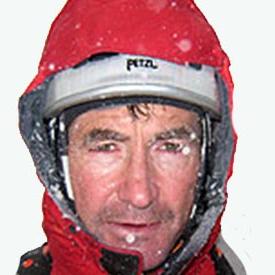