A four-time Olympic Rowing champion and 10 times World Rowing Champion, Matthew Pinsent is one of Britain’s most successful athletes in any sport. He is also an IOC member – elected to his post by the athletes. As an Olympic speaker and sports speaker, Matthew tells anecdotal tales of competing the highest level of international competition and how to maximise success.

After the Olympics, Matt returned to his studies at Oxford and rowed in the Boat Race as well as winning more World titles. A wonderful after-dinner speaker, Matthew has experienced sport at an elite level, allowing him to recount a plethora of anecdotal tales of his time in the limelight. The pair retained their Olympic title in 1996 and then transferred to a four at which they won World Championship titles in 1997, 1998 and 1999 before taking Olympic golds in 2000 and 2004.

Matthew spends much of his spare time on Olympic business and working for the charity, Sparks. His varied career and extensive knowledge of peak competition make him an ideal Olympic speaker. Since Matthews’ retirement in 2004, he has also taken on a number of media and commercial sporting projects. As one of the BBC’s leading broadcasters for 2012, Matthew fronted the World Olympic Dreams TV series, following 26 international athletes on their journeys from around the world to the London games.

Matthews’ experience as a highly successful Olympic speaker has translated well into his extremely authoritative and accomplished after-dinner and keynote speeches. His inspirational delivery of speeches can be tailored to any client’s briefs, with a focus on teamwork and communication that is an elemental part of any athlete’s life. The team dynamics of a rowing crew translate perfectly into a business environment as a sports speaker, the dedication and drive Matthew encountered is the aspiration of any firm.

Already having been appointed a Member of the Order of the British Empire in 1993, Matthew was raised to Commander (CBE) in 2001. Equally adept as a sports speaker or conference facilitator and event host, Matthew interacts fantastically with an audience with humour and charm whilst ensuring your event runs on time and to plan.

Watch an interview with Matthew, here:

‘A big ‘Thank you’ to Matthew and Champions for yesterday, it was great to meet him. The whole day went well and Matthew’s talk was fantastic! I hope he enjoyed himself too and I hope I have the opportunity to work with you both again soon.’ – Procter & Gamble

‘Couldn’t be more pleased with our choice of guest speaker at our annual conference.  Matthew gave an excellent performance in front of over 200 of our Senior Managers and Board of Directors, his take on motivation and winning margins was exactly what we were looking for.  He also took the time to chat with many of our delegates over lunch and was more than happy to pose for what must have seemed like endless photos’ – Mark Wardell, Euro Car Parts

Back to 'Olympic Speakers'
To book Matthew Pinsent as the speaker for your corporate event, function or conference, contact The Motivational Speakers Agency using the contact details below:
Enquiry form 0207 0787 876 [email protected]
* 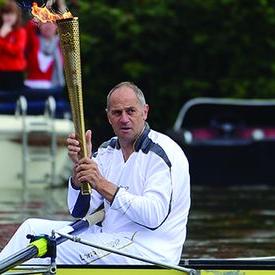