Jake and Hannah Graf are widely known as the UK’s ‘Transgender Power Couple’ after being named as the Most Influential LGBTQ Couple by The Independent. Formerly an Officer in the British Army and an award-winning actor, director and writer, the couple are successful in their own rights and now work to promote acceptance of the LGBT+ community as speakers. Committed to raising awareness and acceptance, Jake and Hannah are perfect speakers for diversity, inclusion and LGBT events.

Jake and Hannah Graf are an inspirational transgender couple who have lived their lives in the spotlight to raise awareness of trans issues. Named as the Most Influential LGBTQ Couple on The Independent’s 2018 Pride Power list, the pair are often referred to as the UK’s ‘Transgender Power Couple’ and booked as speakers for corporate events surrounding topics of acceptance, gender equality, mental health and LGBT+ awareness.

Highly successful in their own rights, Jake and Hannah first met back in 2015. Jake is widely known as an award-winning actor, director and writer- having appeared in famed titles such as The Danish Girl and Collette. He is also famed for the viral hit Headspace and has impressed with film festival productions such as Brace, Dusk and Chance. Hannah was deployed as an Officer in the British Army, serving across Afghanistan, Canada and Kenya as an Officer of the Royal Electrical and Mechanical Engineers. After coming out as transgender in 2013, Hannah became one of the highest-ranked transgender officers in the Army and was also named as the Transgender Representative of the Army.

Married in 2018, the couple has since become parents to daughter Mille and acted as role models to other transgender and LGBT couples with the dream of starting a family. The pair have avidly supported charity work, acting as Patrons of the Mermaid charity. Jake is also a Patron of The Albert Kennedy Trust and the Ditch the Label anti-bullying project and Hannah is an Ambassador for LGBT Sport Cymru. The pair have also acted as judges for awards, with Hannah a Judge of the British LGBT Awards and Jake an Ambassador and Judge of The National Diversity Awards, Rainbow Honours and the European Diversity Awards.

Jake and Hannah have also been the recipients of various awards. Jake has been named on the OUT100 List of OUT Magazine, the Pride Power List by The Independent and the LGBT Power List by The Guardian. Hannah has also been recognised with awards from the Out in Work 100 Awards, Cosmopolitan Ultimate Women Awards and the British LGBT Awards. Hannah has also notably been appointed MBE in 2019 and the pair are highly regarded for seizing every opportunity to increase awareness, understanding and acceptance of trans individuals.

Now internationally sought as speakers for all medium of events, Jake and Hannah are committed to making members of the LGBT+ community feel more accepted. Seasoned speakers, Jake was formerly invited to speak at the first trans-specific White House event and has also spoken in Westminster Speaker’s House. Hannah has also frequently spoken to top media outlets and featured on the likes of Lorraine and Good Morning Britain. Together, Hannah and Jake have spoken for top organisations including the likes of Citi Bank, Lloyds, the Stonewall Workplace Conference, the Pride in London Gala and Warner Brothers. Helping to dispel myths surrounding transgender people and encouraging acceptance of such individuals in both the workplace and society as a whole, Jake and Hannah Graf are ideal speakers for events themed on diversity, inclusion and LGBT+ awareness.

“Not only are Jake and Hannah charismatic, passionate, and informed speakers, but Jake's films generated a lot of important discussion and questions from our audience. Their honesty around transition and candid answers to questions was endearing, and we have had only positive feedback from our event. Jake and Hannah were a pleasure to work with – happy to adapt to whatever style of speech we wanted them to deliver, and their charity work brought a lot of new faces to our company.” – Alexandra D’Sa, Business Analyst, Citi

"I just wanted to thank you again so much for your work organising the event with the Army last night. It is up there as my favourite D&I event yet. Super informative and left us all with proper practical tips for addressing this complex area.  Very timely with the announcements yesterday re the new head of the Army and UK Armed Services (both of whom, from what I hear, have been major drivers behind the Army’s significant advance in the area of D&I)." - Head of HR, BNP Paribas

"We recently booked Jake and Hannah to speak as our keynote address at a large-scale InterComms LGBT+ Network event and we can safely say they were an incredible opener to our panel discussion 'Why just the G in LGBT? Let's start with the LBT'. Their story was personal, inspiring, touching and delivered with aplomb to an extremely engaged audience. They also got involved with the panel debate afterwards, delivering well-thought out and balanced answers to our attendees questions. Jake and Hannah are consummate professionals, and incredible ambassadors for the Trans and LGBT+ communities." - Ethan Spibey, Chair of InterComms LGBT Network

“Listening to Jake and Hannah's story and having the opportunity to watch Jake's film was educational, emotional and enjoyable. Huge thanks to them for their honesty, openness and for being their authentic selves.” – Sara Hills, MD, EMEA CEO Chief of Staff, Citi


Back to 'Diversity and Inclusion Speakers'
To book Jake and Hannah Graf as the speaker for your corporate event, function or conference, contact The Motivational Speakers Agency using the contact details below:
Enquiry form 0207 0787 876 [email protected]
* 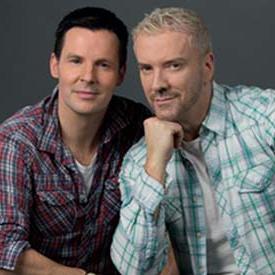