In his early career, Jonny won the Formula Ford Festival at Brands Hatch in 1985, before going on to win the 1987 British Formula 3 title, alongside Eddie Jordon. After a career-threatening injury from the International Formula 3000 put Jonny’s driving future at risk, he had to change his driving style to get back on the track. Returning to racing at the Formula One 1989, he scored points on his debut at the Brazilian Grand Prix in Rio de Janeiro, whilst driving for the Benetton team. Finishing only 10.5 seconds behind the racer winner, Nigel Mansell for Ferrari, Jonny finished 4th.

After a brief pause, Jonny returned to race at the Formula 3000, in the highly respected Japanese series, before moving to race with Tyrrell. Between 1990 to 2000, for an entire decade, he was a fixture in Formula One, switching to the Lotus team managed by Peter Collins.

During this period, in 1991, Jonny drove two rounds of the Fuji Long Distance Sports Car Series, co-driving a Mazda 787B, in which he finished fourth both times. During the July round, when Jonny chose to stop his car and help a fellow competitor who had suffered a high-speed puncture, his choice earned him the Sportsman Award at the 1991 Autosport Awards. Moving to the Swiss team, Sauber, from 1996 to 1998, Jonny scored two podium places before securing 3rd ath the final Grand Prix win in the rain-affected European Grand Prix.

After retiring from Formula One racing, he turned his hand to Sports Cars, with the hope of repeating his Le Mans 24 Hours win of 1991. At the wheel of an Audi R8, Jonny won the Le Mans Series championship, winning the races at Monza and Spa.

With his years of racing experience, Jonny Herbert is a highly popular motorsports speaker. Charismatic and witty, he shares his stories straight from the track, touching upon topics like peak performance and adapting to overcoming challenges.

Check out this video of Johnny, below:

"My wife and I were at your presentation at Rothes Halls, Glenrothes, Fife. What a fantastic evening we had and enjoyed the relaxed and informative format topped off with an interesting Q&A session. We've followed your career and genuinely believe that you had the potential to be a World Champion. Thanks for the evening - very much appreciated." - Iain and Jayne, Rothes Halls, Glenrothes

"Just thought I would let you know how much we enjoyed the show at Stevenage on Tuesday evening and thank you for signing my Audi picture taken at Silverstone. Jackie has refused to wash her face since you gave her a quick peck on the cheek! We are looking forward to your next tour already!" - Keith and Jackie Green, The Gordon Craig Theatre, Stevenage

"Just wanted to say that Johnny Herbert was brilliant today. He stayed to past 5pm, was so friendly and suffered questions I am sure he must have heard many times! Although we did struggle to get him out of the F1 simulators!! Thank you so much for sorting everything out for me." - Sally, Move with Us

Back to 'Motorsports Speakers'
To book Johnny Herbert as the speaker for your corporate event, function or conference, contact The Motivational Speakers Agency using the contact details below:
Enquiry form 0207 0787 876 [email protected]
* 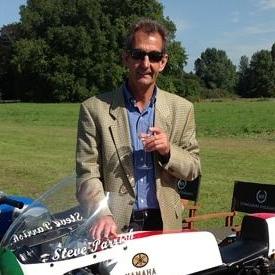