Not to be confused with the magician of the same name, motivational speaker Darren Campbell MBE is an Olympic sprinter whose greatest achievements include being 2004 Olympic champion in the 4 x 100m relay and 2000 Olympic silver medalist in the 200m. In the World Championships, Darren won a bronze medal in 1997 and a silver in 1999 in the relay as well as another bronze in 2003 in the 100m.

While not wowing the crowds on the track, Darren played professional football for two years, with Weymouth and Newport being the two teams benefiting from his talent. Retiring in 2006 while still at the top of his game, Darren has worked with disaffected young people where his motivational approach has enabled them to engage with society. He has also helped professional sportsmen to learn how to use their speed effectively on the pitch – these include footballer Andriy Shevchenko and rugby players Mark Cueto and Toby Flood.

Finally, Campbell has headed up several athletics-related television programmes, formed a business partnership with Linford Christie and set up his own company called Pro Athlete Supplementation.

Get a taste of what Darren is like at events below:

“He told an inspiring personal story which touched everyone in the room. The room was completely quiet – a sign of a good speaker.” – KAT Creative Limited

“Darren’s story is nothing short of inspirational. He delivered everything we required him to do following the conference call, and my sales team were left motivated and ready to face the new year.” – Mauriance Addison, Chairman, M2K Services

“Darren’s talk was fully motivational and inspirational in his talk. I only managed to hear the end of the sessions but feedback I have received so far is that it went really well. Thank you so much for your help in arranging everything with Darren” – Kelly, St Marches School

"A massive thank you to Darren, he is an absolute superstar and incredibly inspirational. Everyone left on a massive high and it was a fitting end to the day and to our network.  It made all the difference with him being there,  just what we needed!" - NHS

Back to 'Olympic Speakers'
To book Darren Campbell as the speaker for your corporate event, function or conference, contact The Motivational Speakers Agency using the contact details below:
Enquiry form 0207 0787 876 [email protected]
* 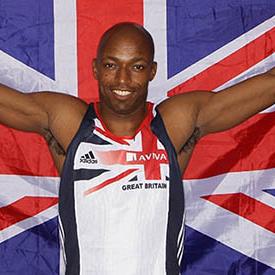