Lizzy Yarnold, former British skeleton racer, was a part of the GB national squad in 2010. Going on to earn two Olympic gold medals between 2014 and 2018, she is renowned as one of the most successful British Winter Olympian and Olympic skeleton champion globally.

During her athletic career, Lizzy set the record for women’s skeleton racing at the Olympics, finishing with a time of 51.46 against Jacqueline Lölling, who was nearly 1.3 seconds slower. Lizzy affectionately named her sled Mervyn, after a former colleague. Starting her sporting success as a heptathlete, she was inspired by Denise Lewis’s 2000 Sydney Olympics performance. Lizzy’s first experience of skeleton racing was in 2008, when she took part in the UK’s campaign, Girls4Gold talent scheme. Though she was initially interested in equestrian competitions, she was advised to try skeleton racing instead.

Since she started competing in 2010, Lizzy won her first race at the Europa Cup, securing her second win the following day. Over the next few seasons, she honed her skills - learning courses, strengthening her performance and perfecting her unique approach - Lizzy quickly achieved World Cup status. Lizzy concluded her 2011/2012 season in a respectable 9th place, became the Junior World Champion and earned a bronze medal at the Senior World Championships in 2012.

In recognition of her contribution to sport, Lizzy was recognised with an OBE in 2014. Despite her young age, she was runner up in the 2014 and 2015 Sky & Sunday Times Sportswoman of the Year, then later nominated for the 2014 BBC Sports Personality Of The Year award.

After retiring from sport due to a persistent injury, Lizzy turned to public speaking. Exploring topics like personal/mental resilience, goal setting, self-awareness, identifying & retaining talent, teamship & Collaboration, Leadership, adapting to change, innovation and controlling your environment, she is a highly sought after speaker. Since her 2014 success, Lizzy is a household name and popular addition to any event. Lizzy’s determination is infectious, her honest account of the hardships she faced leaves audiences inspired to pursue their own dreams.

From motivational speeches, Q&A and workshops, she can tailor her presentation to perfectly suit the unique occasion. Having explored Mental Toughness at University, Lizzy doesn’t just have a wealth of personal experiences but psychological knowledge of mental wellbeing.

"Our enormous thanks to Lizzy for a brilliant session at Risky Business. She went down incredibly well and created such a buzz and positivity." - Risky Business Conference

"Thank you so much for coming into the office to talk to some of our younger staff, the feedback from your talk was excellent and they all find your achievements very impressive and inspirational." - JLT Specialty

"Lizzy's story was compelling and so relevant to anyone who has talent and potential, facing and overcoming all challenges with real intent and focus. I was so inspired by Lizzy's story that I asked if she would speak at our peak season conference to an audience of 1000 retail store managers." - Argos

"Quite frankly Lizzy was awesome - absolutely on the money and just the thing to motivate Officer Cadets during what at times is quite a gruelling process." - Royal Military Academy Sandhurst

Back to 'Olympic Speakers'
To book Lizzy Yarnold as the speaker for your corporate event, function or conference, contact The Motivational Speakers Agency using the contact details below:
Enquiry form 0207 0787 876 [email protected]
* 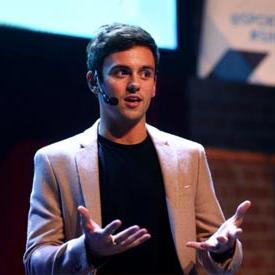