Lanfranco Dettori is considered to be one of sports’ most eccentric, charismatic and funny personalities. Renowned for his joyous leaps from the saddle, refreshing humour and dapper dress sense, Frankie is a loved television personality and a household name.

As a horse racing speaker, Frankie has the ability to motivate and inspire others. Frankie’s humorous and anecdotal style captivates audiences whilst instilling the mind set that has allowed Frankie to achieve peak performance and maximize his success. Frankie was destined to become a jockey from birth. A son to a famous and successful Italian Jockey, Frankie left school early and began his apprenticeship. Thankfully, his success quickly assembled itself, becoming the first teenage jockey since Lester Piggott to record 100 victories in just one season.

One of the most successful jockeys of the modern era, Frankie was the derby Award Winner for three consecutive years. His influence was so large that he was also named the National Sporting Club’s Sportsman of the Nineties. Frankie became a favourite on our television screens as well, appearing regularly as a team captain on the ever-popular BBC show A Question of Sport.

Frankie considers his greatest achievement to be when he rode seven winners at the Ascot Festival in one day in September 1996, this highly unlikely feat cost bookmakers over twenty-five million pounds. As a sports speaker, Frankie discusses the drive and determination needed to achieve goals and realise ambitions, two attributes that are relatable to all aspects of life.

The following Frankie has and his consistently high placing always mean his horses are well backed; this style of riding has led to the so-called Frankie Factor. In 2000, Frankie was awarded with an MBE for his services to sport and horse riding. Along with his illustrious horse racing career, Frankie has gone on to become a restaurateur with the highly regarded Chef Pierre Marco White; opening Frankie’s Bar and Grill. Frankie’s varied career allows him to provide insights into what it took for him to remain at the top of his game during talks as a horse racing speaker, whilst motivating others to make the most of what they have.

Back to 'Peak Performance Speakers'
To book Frankie Dettori as the speaker for your corporate event, function or conference, contact The Motivational Speakers Agency using the contact details below:
Enquiry form 0207 0787 876 [email protected]
* 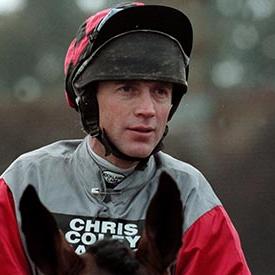