Former Chief Design Officer at Apple, Jony Ive is the man behind such influential designs as the iPod, iPad and iMac. Having created some of the world’s most renowned devices in history, and been recognised with a Knighthood for his achievements, Jony is now championing innovative design in corporate clients through speaking engagements.

Designer of some of the world’s most progressive objects, Jony Ive is the mastermind behind the iMac and subsequent Apple products. As a member of the leadership team at Apple for almost 30 years, Jony’s dedication to industrial design has changed the world and he now draws on his unrivalled experience to educate others. As a keynote speaker, Jony shares insights from his career at Apple, the importance of digital innovation and the power of creativity, supported by personal anecdotes. A speaker who has transformed the industry and set a new standard for global design, Jony is the ideal speaker to transform your business.

Joining Apple in 1992, Jony worked his way through the senior positions including Senior Vice President of Industrial Design until he was eventually included in the C-Suite employees as Chief Design Officer for Apple in 2015. A pivotal figure in the progress of Apple, Jony is credited with the success of such devices as the iPod and subsequent models, 1st generation iPhone and the iPad released in 2010. With much of the brand’s globally renowned technology designed by Jony, he has played a defining role in the market dominance of Apple and gained an impressive individual reputation for his contributions. Prior to leaving Apple in 2019, Jony also played a vital role in the design of Apple architecture, including stores and the IOS interface.

An early love of cars prompted Jony to pursue a career in design and achieve a place studying an industrial design degree at Newcastle Polytechnic. During his time in academia, Jony made an impression on the industry with his work being exhibited at the Design Museum in London and winning the RSA Student Design Award, a testament to his standout talent. Gaining his first professional position, Jony joined Roberts Weaver Group before transferring to London start-up, Tangerine, a year later. It was at Tangerine where Jony’s evident gift for design saw Apple approach him for a role.

In recent years, Jony has founded his own company, LoveFrom where he continues to support Apple as a client. Additionally, he is the Chancellor of the Royal College of Art London, a role that allows him to champion the next generation of aspiring designers. Recognised for his global success, Jony is the recipient of the Professor Hawking Fellowship from Cambridge Union Society, was given a Knighthood and was ranked the most influential person in British Culture by the BBC. With such a defining career behind him, Jony is an incredibly influential speaker on a range of topics.

Credited with the design of many iPhones, iPads & iMacs

Honoured with a Knighthood for his Achievements

Chancellor of the Royal College of Art London

Ranked the Most Influential in British Culture in 2004

Back to 'Technology & Innovation Speakers'
To book Jony Ive as the speaker for your corporate event, function or conference, contact The Motivational Speakers Agency using the contact details below:
Enquiry form 0207 0787 876 [email protected]
* 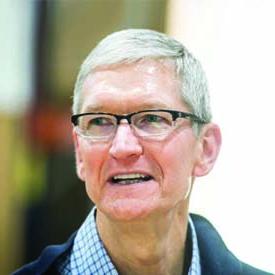