One of the most well-regarded diversity and inclusion experts internationally, Asif Sadiq has worked for industry leaders including Adidas, The Telegraph, and WarnerMedia. Combined with his public sector roles transforming equality in policing, Asif’s experience ensures he is the ideal speaker to educate audiences on strategies for improved inclusion.

Asif Sadiq has made a global impact as a diversity and inclusion specialist across both the public and private sector. Widely recognised for his ability to reshape corporate environments through education and inclusive strategies, Asif has worked in senior positions at many of the world’s leading businesses. Honoured with an MBE from the Queen for his services to equality and recipient of the Head of Diversity Award at the European Diversity Awards, Asif’s influence is undeniable. Able to support corporate clients in transforming their employee wellbeing, retention and output through improved diversity, Asif is a truly exceptional speaker to book for events.

Taking on the role of Global Head of Diversity and Inclusion for Adidas in 2020, and Reebok at the same time, Asif was sought after for both the leading international brands to pioneer their equality campaigns. Responsible for ensuring a sense of belonging for all, Asif educated the company from within on practices that improved equality for employees and in turn made the business a recognised champion of diversity to consumers. In July 2021, Asif was appointed as WarnerMedia's (Warner Bros, Cartoon Network, CNN, HBO Max) Senior Vice President of Equity & Inclusion.

Previously, Asif has held similar positions for EY as the Head of Diversity and Inclusiveness for Financial Services, in which he coordinated a business-wide approach to improve inclusivity and as the Head of Diversity, Inclusion and Belonging at The Telegraph. An evident expert in his field, Asif is credited with futureproofing some of the biggest brands in an evolving world.

An advocate for greater equality from the outset, Asif began his professional career with the police as a special constable and representative of the City of London force. During his time in the public sector, Asif worked as the Head of Equality, Diversity and Human Rights, tasked with delivering robust strategies to support equality throughout the police service, from employee to detainee. Further to his impact on the city, Asif was called into the role of President of the National Police Staff Support Network and tackled hate speech and crime for the United Nations.

Currently, Asif sits on several boards as an expert authority and is at the forefront of initiating authentic inclusion programmes for WarnerMedia. His work has not only seen him listed as one of the Most Influential Global D&I Leaders by Hive Learning, but has also ensured Asif is highly sought after on the speaking circuit. Able to offer actionable advice to empower employees, Asif’s talks are transformative for all audiences.

Recently, our Sales Executive, Chris Tompkins, sat down to conduct an exclusive interview with Asif Sadiq. Watch our Q&A to hear Asif speak about diversity, equality and inclusion in the workplace.

The journey from Diversity, Inclusion to Belonging
Corporate diversity effectiveness and strategy development
Creating inclusive leadership within organisations
How to be an ally for gender equity
LGBTQ+ Inclusion in the workplace
How to manage and support Employee Resource Group

"A huge thank you, Asif. The session was everything we hoped it would be – your content prompted some really great questions which I hope is indicative of colleagues on the call reflecting on their own practice. I have already had several colleagues reach out to me directly to say how inspiring they found the event. Thank you for arranging the presentation by Asif Sadiq. The Army Inspectorate is conducting a review into the training and education of behaviours, so listening to Asif was really useful." - Maria, Leadership Consultant, Leadership and Engagement Team, Ministry of Defence

"Please send our sincerest thank you to Asif! His presentation was incredible and I've already gotten some great feedback. Thank you for all of your help, hopefully we can work together again in the future" - Lauren, Marketing & Event Specialist, Imagine Team

"Both speakers we've had this year have been fantastic. We just had the talk and Q&A with Asif Sadiq who was brilliant- his talk was insightful and powerful, whilst also funny and poignant. A great discussion and one we're honoured to have been able to host" - Jahnavi, Deliveroo

"Asif Sadiq was a fantastic Black History Month guest. He spoke with authority, clarity and provided excellent insights and practical examples of how we can take the drive for equity in our workplaces and society forward. The audience engagement and feedback has been overwhelmingly positive. I would also like to say how easy Asif was to work with. He has been engaging, flexible and accomodating throughout the entire process. Because of all of the above, Asif comes highly recommended by us" - Ali, TSB

"Asif is very knowledgable around the EDI subject matters, leaving thoughts on how we can implement an open culture. Recognising that we make mistakes and how we learn from them? Asif also speaks openly about some of his personal experiences, which allows his audience to open up to him. I would have no hesitation in using Asif again around this subject matter and can see how he has an MBE. Thank you for giving me some insightful ideas, that got the cogs moving" - Charlotte, Open Uni

"It was a really good talk. Very insightful and thought-provoking. It's given us lots to think about for our D and I plan that we are going to put forward. We received lots of positive feedback from colleagues after the talk" - Melinda, Sage House

"We've just come off the call with Asif and I just wanted to say that it was absolutely brilliant- perfectly executed and so insightful. The immediate feedback from the participants has been amazing, so I'm hoping you could pass our huge thanks to him" - Rosie, CAE

"On behalf of all of us I wanted to drop you a quick line to say a MASSIVE THANK YOU to Asif for joining us today, he is amazing and has really caused quite a stir at IMO with an engaging and thought-provoking chat. I also want to express our gratitude to him for dedicating us more time than originally scheduled to answer the questions from our staff, there’s an appetite for more from him and it has lit a fire in people’s bellies, I would say. We really appreciate his insights and the ease and familiarity with which he has approached this exercise with us." - Bea, IMO.org

"Today the sixth form were privileged to welcome Mr Asif Sadiq MBE with whom we explored the importance of diversity and the need for greater inclusion in every facet of society...He remains committed to improving diversity and inclusion in the future, and he wants to make a real and direct impact in his home area. All of his answers were insightful but more importantly honest, providing a thorough insight into his award-winning career. Overall, a very topical and passionate lecture." - Y13 Student, Forest School

"I would like to take this opportunity to thank you for your involvement with our Staff Conference on Wednesday 19 August. I appreciate how busy your diary must be and I am grateful that you were able to join us live on the day. We have been receiving really positive feedback from our staff and it’s certainly a great way to start the new academic year. Thank you once again for your support." – Sam, Principal & CEO of Wakefield College

Honoured with an MBE from the Queen

Former Global Head of Diversity and Inclusion for Adidas & Reebok

Current Head of Equity and Inclusion for WarnerMedia

Back to 'Diversity and Inclusion Speakers'
To book Asif Sadiq as the speaker for your corporate event, function or conference, contact The Motivational Speakers Agency using the contact details below:
Enquiry form 0207 0787 876 [email protected]
* 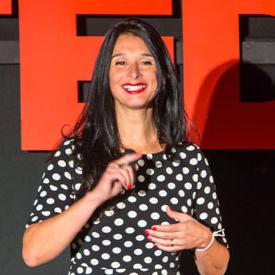