Over the past decade Isha Datar has pioneered the field of cellular agriculture. Passionate to revolutionise the way that food is produced, Isha has been at the forefront of various companies making food without the animals they come from. As a speaker Isha explores “vitro-meat” and encourages the adoption of cellular agriculture into the food market.

Isha soon became highly passionate about cellular agriculture, and she founded multiple businesses to introduce it more prominently into the food market. She also realised that there was a lack of funding in the field, and so she began to raise awareness of animal products that are made without animals. She published a review in the Innovative Food Science and Emerging Technologies journal titled Possibilities for an in-vitro meat production system, which increased the awareness of the field.

Before joining the world of agriculture, Isha worked as a policy associate at GlaxoSmithKline. Here she worked to assess countless policy issues and she was able to develop her scientific and analytical skillset. Isha is also a Director’s Fellow of MIT Media Lab and was a Foundation Fellow of the Shuttleworth Foundation.

As a speaker, Isha has previously delivered TED talks, with her speech Re-thinking Meat having been watched by thousands. After coming to terms with the environmental impact of meat production, Isha is pioneering food creation through cellular engineering, revolutionising the food market. An advocate for sustainability, Isha encourages others to take a step back and look at the way in which their food is produced and the impact that it has on the world around us.

A pioneer of cellular agriculture, here Isha is delivering a TED talk on re-thinking meat. Isha is frequently sought as an expert in vitro meat and advocates the responsible use of science in food security.

From Animal Farm to Science Lab: The High-Tech Future of Food

2016- Appointed as a Shuttleworth Foundation Fellow

BSc in Cell and Molecular Biology from the University of Alberta

Masters in Biotechnology from the University of Toronto

Back to 'Sustainability & Environment Speakers'
To book Isha Datar as the speaker for your corporate event, function or conference, contact The Motivational Speakers Agency using the contact details below:
Enquiry form 0207 0787 876 [email protected]
* 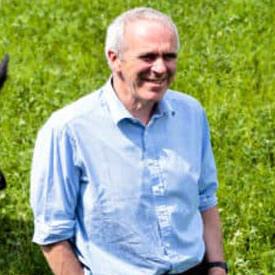 Patrick Holden Farmer and activist for organic and sustainable farming