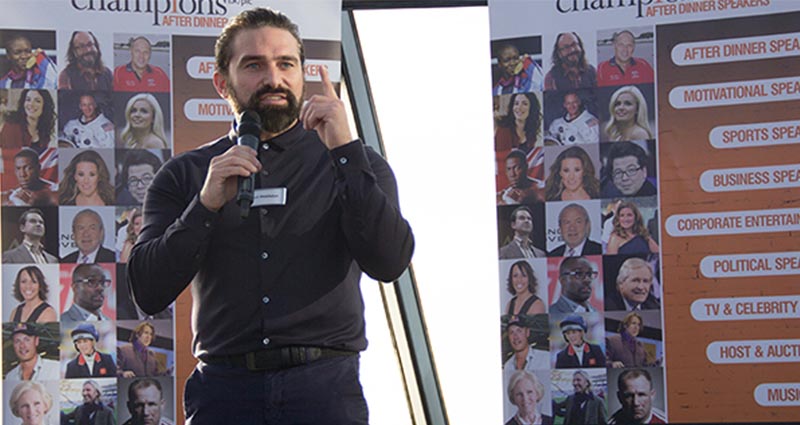 Keynote speakers offer guests insight into a vast range of fields adding a sense of refinement to all manner of occasions. Having worked in 43 countries around the world and with over 3000 speakers each and every year, we have seen plenty of inspirational individuals and figureheads with awe-inspiring stories to share.

Here are just a small selection of the speakers we have loved working with in the past:

Everything about Geoff Ramm is Hollywood. Featured in Forbes, he is the masterful creator behind Celebrity Service and OMG Marketing. Helping brands to design memorable customer service experiences, Geoff offers a compelling insight into branding, allowing businesses to push the boundaries of their marketing strategy.

Counting British Airways, Specsavers and Suzuki among his long list of clients, Geoff is a keynote speaker unlike any other.

“Geoff was great! He totally captured us with his amazing stories and the messages were on point! I’ve had lots of great feedback and one of the team has even recommended Geoff to his previous organisation. Thank you for a great recommendation – spot on!” – Maxine Lane – MDL Marinas

One of Britain's most dynamic businessmen, Piers Linney is an award-winning entrepreneur and former star of television investment show, Dragons' Den. Named in the list of Top 100 BAME Leaders in Business, Piers is an expert at supporting start-ups and SME's scale-up.

In his role as a Non-Executive Director of the British Business Bank, he has helped secure £12 billion of financing for growing businesses. Former CEO of Genesis Communications, a market leader in the cloud-based space, Piers is a keynote speaker specialising in the tech space, as well as business management.

“Truly an inspiring speech… Relatable to many in some shape or form. Perseverance is the key to success!” – Preeti B, Hamstead Law Practice 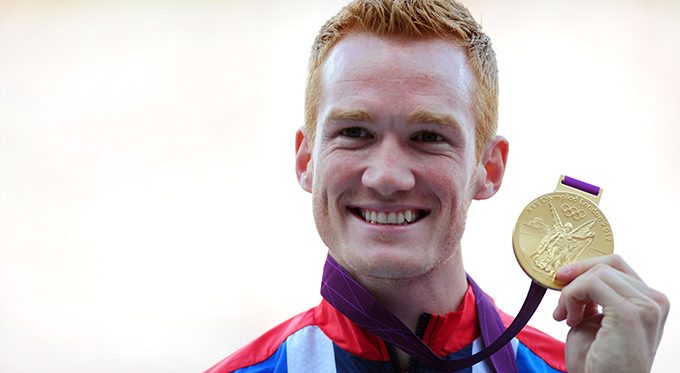 One of the most down-to-earth and pragmatic sports speakers in the UK, Greg Rutherford has inspired countless audiences with stories from his personal journey. Showcasing the drive and determination that saw him end his long-jump career with 6 gold medals, including one at the London 2012 Olympic Games, Greg enjoys a reputation as one of the country's most-loved sportsmen. He even has a golden post box engraved with his name in his hometown of Milton Keynes. Tapping into themes such as peak performance and mental resilience, Greg is a typically engaging presence at all manner of events.

"Greg gave a great speech and I’m sure the children will remember the phrase “fat don’t fly” for years to come! He was very generous with his time meeting the children, posing for photographs, etc after his speech. Thank you for your efficient organisation.” - Adelaide – Heath Mount School

World-famous engineer and co-founder of Tesla, Martin Eberhard has been named among the Top 24 Innovators of 2007. Ever since he has continued to play a key role in the growth of Tesla, helping to drive them to new heights. Today, Martin's experience is helping businesses to do the same. A specialist in electrical engineering, as well as a pioneer in the fields of sustainability and technology, there is no doubt he offers a level of expertise and experience rarely so evenly balanced.

Offering a uniquely breathtaking keynote presentation, Gerd Leonhard is without a doubt one of the most in-demand futurism speakers of the modern era. Having penned the bestselling book, Technology Vs Humanity, Gerd was instantly recognised as a thought-leader in his field. In his keynote speeches, he can discuss in detail how humanity can triumph in the face of dramatic technological change.

Appearing at over 1500 events in countries across the world, speaking in total to 2.5 million people and counting, his knowledge of both the challenges and opportunities that technology brings is unprecedented. No matter if your conference focuses on consumer trends, humanity, e-commerce, business, leadership or futures - Gerd is a must-have speaker.

“Gerd was the opening keynote speaker at our social media and content marketing event and made a huge impact to all 400 listeners. People discussed and quoted him throughout the day and in many blog posts afterwards. We organisers were all very happy about this.” – Sanna Salovuori – Co-Founder, PING Helsinki Event 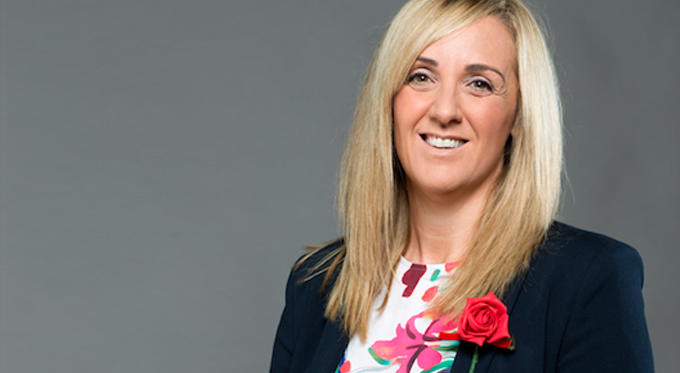 Head Coach of England's national netball team, Tracey Neville has led the team to a number of historic achievements. Tracey racked up 81 caps for England in a career as a netball pro. Since her retirement from playing the game, she has earned herself a place among the most successful netball coaches in the game's history.

Responsible for helping to revolutionise netball in England, she has instilled a vibrant team culture that was showcased in England's gold medal win at the Commonwealth Games 2018. Crucial to growing awareness of netball too, Tracey presents a wealth of wonderful stories and experience beneficial to businesses big and small.

SAS: Who Dares Wins is the television show that put Ant Middleton face to face with the British public. Since appearing as the chief instructor on the reality show, Ant has become a hugely admired media personality. His experiences at the highest level of endurance, both from his time in the Special Forces and his explorations that include Mt Everest, have displayed themes of courage, mental resilience and toughness that have made him an inspirational figurehead in his field.

"Our audience was mainly military and ex-military (myself included) and his after-dinner speech really struck a chord with us all. Not only was he inspirational and thought-provoking, he was also very modest and humble. Everyone I’ve spoken to afterwards has been full of praise for Ant and the way he spoke about his past experiences.” – Andy, Babcock International 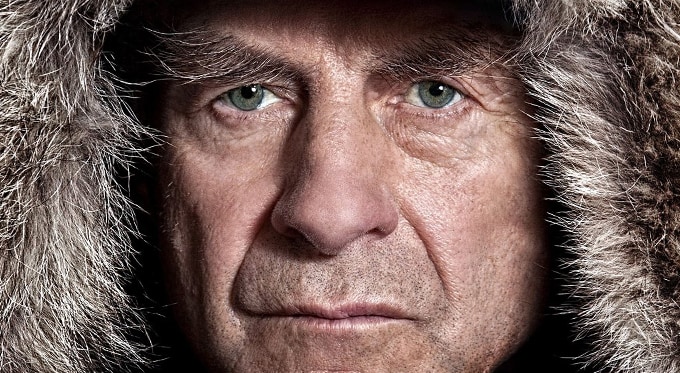 Referred to as 'the world's greatest living explorer' by The Guinness Book of Records, Sir Ranulph Fiennes has lived life from record to record. His incredible array of experiences include becoming the first man to reach both poles, to circumnavigate the world along the polar axis and to cross the Antarctic and the Arctic Ocean, alongside fellow explorer Charles Burton.

He continued to break the boundaries of human endeavour throughout his career, successfully summiting Everest in May 2009 to be the oldest Briton ever to do so. He has raised a remarkable £14 million for UK charities making him the top fundraiser on JustGiving UK. A truly special explorer with a passionate story to tell of defying odds and overcoming adversity - Sir Ranulph Fiennes was listed as "One of the world's top ten speakers" by The Daily Telegraph.

“Ran’s talk at the 100 Property Club Xmas Dinner on 11th December 2018. In my opinion, Sir Ranulph was the best speaker we have ever had. He was extremely entertaining and our guests only said glowing things about his talk. He was a complete professional on the night and was a pleasure to be with. I regretted only letting him talk for an hour as could have listened to him for much longer. I would happily recommend him.” – Richard, Vail Williams LLP 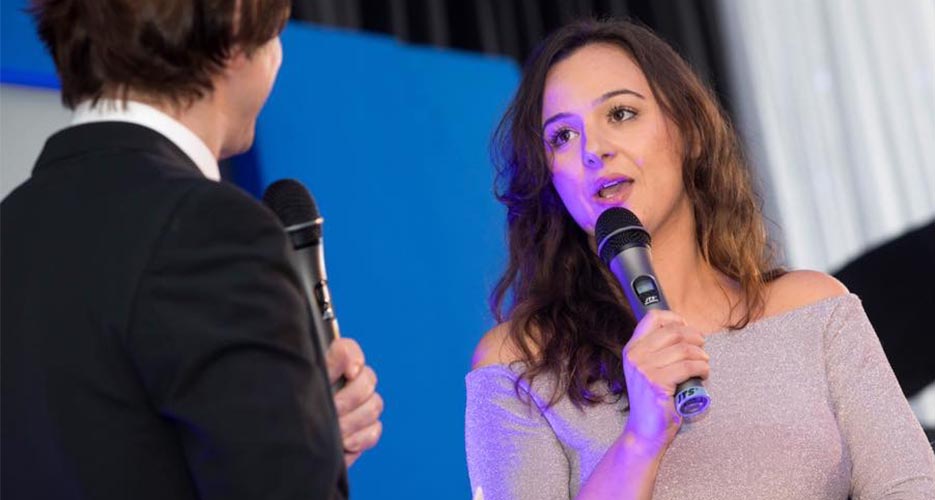 A much-admired contestant on The Apprentice 2018, Khadija Kalifa is the owner of the award-winning eco-cleaning company, Opal & Pearl. The self-confessed 'mumpreneur' has inspired corporate audiences with the story of her impressive rise in business. In demand as a keynote speaker, Khadija can discuss a range of topics from staying on trend to beating the competition.

"Khadija’s journey from A-Level student to entrepreneur is inspiring. She is able to speak with passion and authority to deliver her step by step guide to success. She shares her dreams and goals and openly discusses her motivations. Khadija’s presentation asks you to think about your own ambitions and provides that all important nudge in the right direction.” – Geraint, Ormiston Bushfield Academy

An actor and television presenter capable of fulfilling various roles from comedy to action, Warwick Davis is one of the most recognisable faces on screen. Having played beloved characters such as Ewok Wicket in Star Wars Episode VI: Return of the Jedi, Willow in the Leprechaun films and Professor Flitwick in Harry Potter - he has proven his dedication to his profession.

Also appearing in television sitcom Life's Too Short, Warwick has consistently shown his talent and versatility. Ideal as a guest speaker for events, he is passionate, engaging and has plenty to discuss regarding his remarkable career inside and outside of the film industry.

If you would like to have a keynote speaker appear at your corporate event, function or conference, simply contact The Motivational Speakers Agency by filling in our online contact form or by calling a booking agent directly on 0207 1010 553.