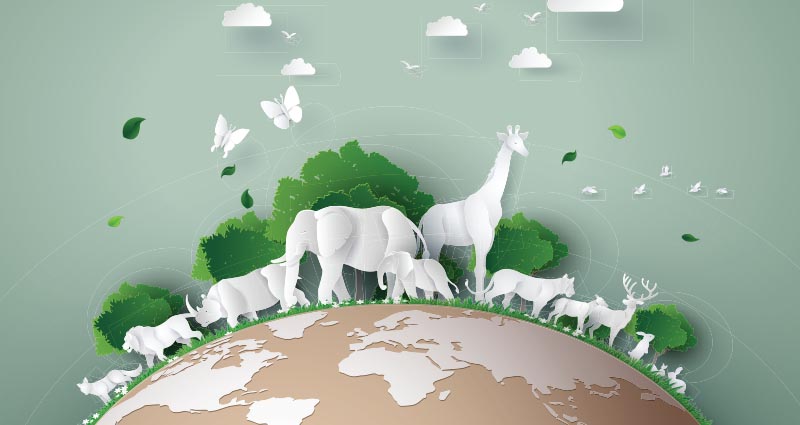 Sustainability continues to be one of the most thought-provoking topics in modern history, with numerous prominent figures raising their voice on behalf of the planet.

To celebrate the incredible work of conservationists around the globe, the World Wildlife Day organisation dedicates the 3rd of March every year to sustainable solutions.

Businesses and organisations use March 3rd to organise sustainability-themed conferences, guided by powerful environmental experts. Discover our top pick of conservationists available to book below.

What Is World Wildlife Day?

The United Nations General Assembly made the 3rd of March a day to celebrate the Earth's flora and fauna in 2013. The day holds significance, as it commemorates the signing of the Convention on International Trade in Endangered Species of Wild Fauna and Flora in 1973.

In 2022, the theme is Forests and Livelihoods: Sustaining People and Planet. As we all try to live in equilibrium with the planet, 2022's mission is to remind people that all life, people and animals, is essential to the world's biodiversity, and therefore should be protected.

As we look towards the 2022 event, now is the time to book a sustainability speaker for your conference:

One of the most iconic environmentalists in modern history, Jane Goodall is a respected chimpanzee expert. She spent over 50 years studying the primates' family interactions, first starting in 1960 with her trip to the Gombe Stream National Park in Tanzania.

In 1977, Jane set up the Jane Goodall Institute, an organisation that further supported Gombe's research. As a testament to her work, she later became a UN Messenger of Peace in 2002 and Dame of the British Empire in 2004.

After losing her leg in an accident, Heather Mills saw first hand how many prosthetics were wasted in the United Kingdom. To target this, she set up a charity that recycled old prostheses for disadvantaged amputees, as well as became a spokesperson for other amputees.

In 2012, Heather was a patron of Vegetarians’ International Voice for Animals and the Vegetarian and Vegan Foundation, reflecting her ongoing dedication to animal advocacy.

For four years, Frank Pope was the only Ocean Correspondent in the world. In this role, he showcased exploration achievements and promoted offshore energy. Despite initially being an advocate for the Earth's oceans, he returned to land in 2012 to work in Kenya for Save the Elephants.

Frank has supported more than 58 partner organisations in Africa, fighting to protect land animals from poaching and trafficking.

Female inspirational figure and global scientist, Tara Shine is one of the most influential figures in the STEM industry. She uses her experiences as a public speaker, to spread awareness of the climate crisis.

Recent speaking arrangements include the World Bank Group, the National Park & Wildlife Service and the Irish Ministry of Foreign Affairs and Environmental Protection Agency. As the Head of Research at the Mary Robinson Foundation, Tara continues to explore methods to reverse climate change.

Sir Tim Smit KBE is credited for The Eden Project's incredible popularity, as not just an entertainment attraction but an opportunity to learn. He also worked closely on the Lost Gardens of Heligan, a picturesque, mystical escape for families.

Both situated in Cornwall, Tim's interest in the Cornish landscape started when his family moved there in 1987. He has since published a book, Eden, and earned the title of Honorary Knight Commander of the Order of the British Empire in 2011.

A regular face at sustainability conferences, Andy Pag's story of exploration in a cooking oil-fuelled bus is utterly captivating. Initially from a scrap yard, he travelled the world in the old bus.

Despite the interior being refurbished with reclaimed materials, the journey was far from easy - or comfortable. An event featuring Andy is privileged to his incredible mindset on the age-old saying; reduce, reuse, recycle.

Chris Packham is a regular face of UK television. He has come to symbolise British wildlife, mostly through popular television shows like BAFTA-winning Springwatch. He is a dedicated vegan and uses his platform to promote a more plant-based lifestyle.

Influential former politician, Chris Huhne, is renowned for being an expert in energy and climate change. The award-winning writer has produced countless articles and journal entries, commentating on the current dangers threatening our planet.

Previous testimonials of his speaking arrangements describe Chris as having "a genuine concern for the environment with a detailed understanding of finance and economics", reflecting his unique perspective as both an environmentalist and an economist.

In partnership with Climate Force Challenge, Robert Swan has vowed to clean up 326 million tonnes of CO2 by 2025. Though this may seem impossible, his conservationist work has already seen him clear 1,500 tons of waste left over from scientific research in 1996, a feat which then allowed the native colony of penguins to reclaim the landscape.

Robert has taken part in several influential missions, including the 1989 Ice Walk and an expedition to clean up debris from a sunken ship, all of which audiences of his speeches greatly enjoy.

Sir Jonathon Porritt is the highly regarded co-founder of The Forum of the Future, one of the UK’s leading sustainable development charities, boasting over 100 partner organisations.

His work has taken him all over the world, as well as to the stages of countless international speaking conferences on sustainability. In recognition of his work, Jonathon was awarded a CBE in 2000, for "services to environmental protection".

How to Book a Speaker for Your Conference

Want to make your World Wildlife Day event one to remember? Book a sustainability and environmental speaker!

With their varied stories straight from the front line of climate change, sustainability and environment speakers are some of the most popular presenters on the circuit.

To book any of the conservationists in this post for your event, simply contact The Motivational Speakers Agency by filling in our online contact form or by calling a booking agent directly on 0207 0787 876.

News Back to the news...
Related Posts
Top Climate Change Speakers Pioneering Sustainable Business Practices
Living Sustainably: From Your Home To The Office
How Will a Motivational Speaker Benefit My Business?